A New Pathway to Sustainability

CCM analyzed New York City Campaign Finance Board (CFB) data to find out how much money political campaigns reported spending on advertising in outlets we identified as community media. Our analysis shows that political campaigns spent at least $1.53 million1 on advertising in community media between January and June 2021. An estimated $1.171 million of this went to community-based print and digital media outlets, publishing in more than 15 languages; and more than $359,000 went directly to community-based television and radio stations. A meaningful cash infusion over a short period of time can – and in many instances did – make a difference to small, independent publishers. 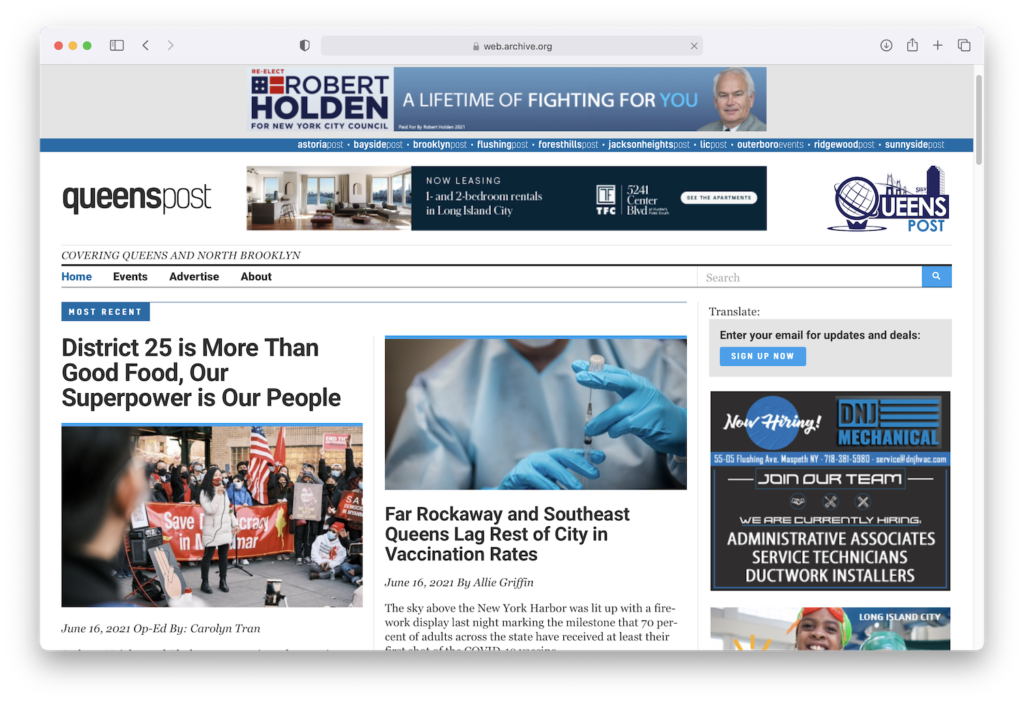 Queens Post‘s website with a political campaign ad, in June 2021.

Hank Levy at the Jewish Post said he was able to reach 11 candidates ahead of their March 26 Passover Issue, none of whom had ever advertised with them before, and generated $6,000 in ad revenue. The Queens Post’s Czarinna Andres said CEI resources helped her generate over $10,000 in ad revenue, about $8,000 more than they’d received before, “Way more than previous elections.” Chelsea Community News had never before received ads from political campaigns, but publisher Scott Stiffler said he was able to generate $6,000 with the help of CEI resources this year.

Increased outreach to Asian and South Asian candidates’ communities of origin was reflected in spending on in-language and community-based media outlets, according to what was reported as advertising-related expenditures in CFB data. Community media outlets that we could identify as serving Bangladeshi and Bangla-speaking communities, such as Weekly Bangalee, Weekly Ajkal, Weekly Nobojug, Thikana and Bangla Patrika, received approximately $41,860. Chinese-language giants Sing Tao Daily received $42,120.65, and World Journal received $32,438.50, according to CFB data. Outlets serving Korean American communities, like Korea Times and Korea Daily, received $49,200. 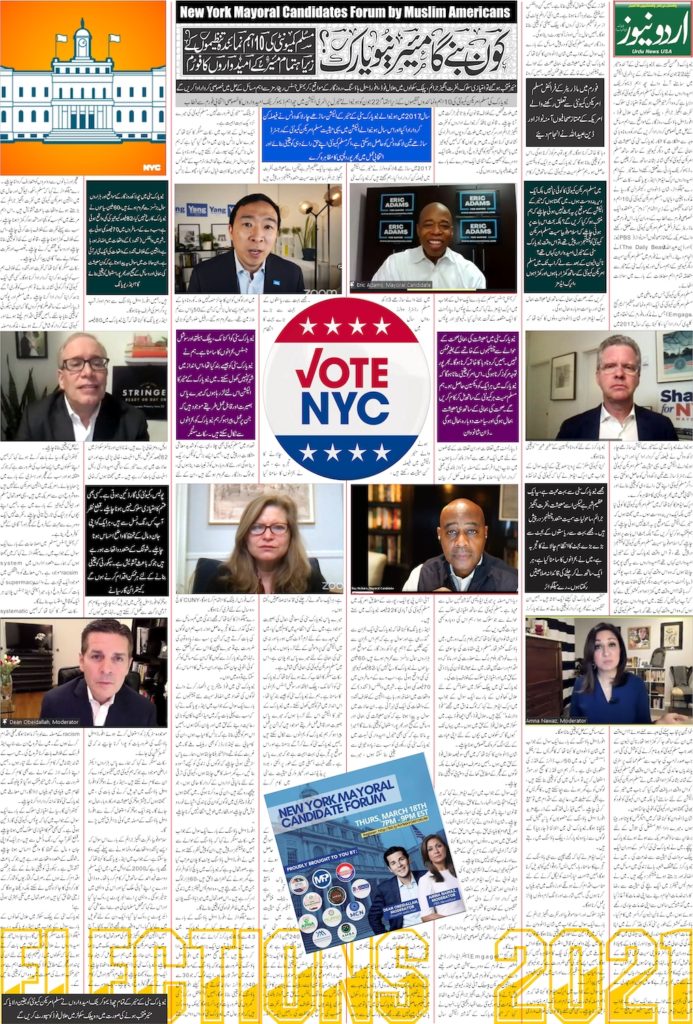 Urdu News publisher Mohsin Zaheer received three ads from three different candidates, for a total of $2,000, for the first time. “This program was very helpful,” he said. Kishor Panthi, publisher of Khasokhas, serving Nepali New Yorkers, said the outlet received advertising from five different campaigns, totaling $9,500, also for the first time. Cristina Pastor, publisher of The FilAm, received her first election-related advertising, a full-page ad from a mayoral candidate for $800.

Noteworthy is that just $114,633 of expenditures labeled as “advertising” in CFB filings went to outlets that we identified as mainstream media and other non-community media outlets. Just $394,355.97 of expenditures labeled as “online” or “digital” advertising went to Facebook and Google. CFB data indicate that political campaigns spent some $49.47 million on advertising across all mediums, including payments to PR firms, media companies and other organizations that advertise or produce advertising-related content on their behalf.

CEI functioned as its own sustainability and civic engagement initiative, unrelated but complementary to CCM’s Advertising Boost Initiative. It should be noted that just $961,810.71 of the $11,657,370.48 that city government agencies spent on election-related advertising in print and digital media outlets went to community media. The government agencies most involved in local elections are not named in the 2019 executive order and resulting 2020 legislation committing 50% of city agency advertising dollars to community media.

Many of the publishers we spoke with view CEI as complementary and connected to ABI. David Greaves, publisher of Our Time Press, received over $5,250 in ads from local candidates – three judicial, two citywide, and two local candidates – and more than $18,000 in city government agency advertising – far more than in previous years, he said. He believes the battle for equity in advertising – and therefore in meeting the information needs of all New Yorkers – must be waged on multiple fronts. “The more we press, the closer we get to our fair share,” he said. Bushwick Daily, which had never before received city government advertising, received $20,000 during the election, according to publisher Alec Meeker, which, in turn enabled him to deepen his outlet’s election-related coverage.