CCM launched CEI in January 2021, engaging longtime community media publisher and communications strategist David Keisman as its manager. A former publisher of The Bronx Times Reporter, Manhattan Times, and The Bronx Free Press, Keisman was uniquely positioned to serve as a liaison between key figures in political campaigns and community media publishers serving New Yorkers of color, from immigrant and religious minority communities, and in neighborhoods less likely to be engaged and served during local elections.

In February, CEI kicked off with the launch of the 2021 NYC Elections Initiative Guide and the City Elections Initiative webpage, and with a Publishers’ Town Hall, attended by 70 community media publishers. Later in the month, the CEI research team created a powerful original tool to help community media publishers quickly and efficiently identify and contact potential advertisers associated with political campaigns: The 2021 NYC Elections Initiative Database. The database compiled in one place the names and contact information for more than 400 different candidates running for local or citywide office during the 2021 primary election, listing their party affiliations, websites and social media platforms, and which neighborhoods or communities they served, as well as key campaign staffers, political consultants, and political committees involved with their campaigns. Furthermore, the database documented how much money each campaign had raised and had on hand at different intervals throughout the initiative’s term. 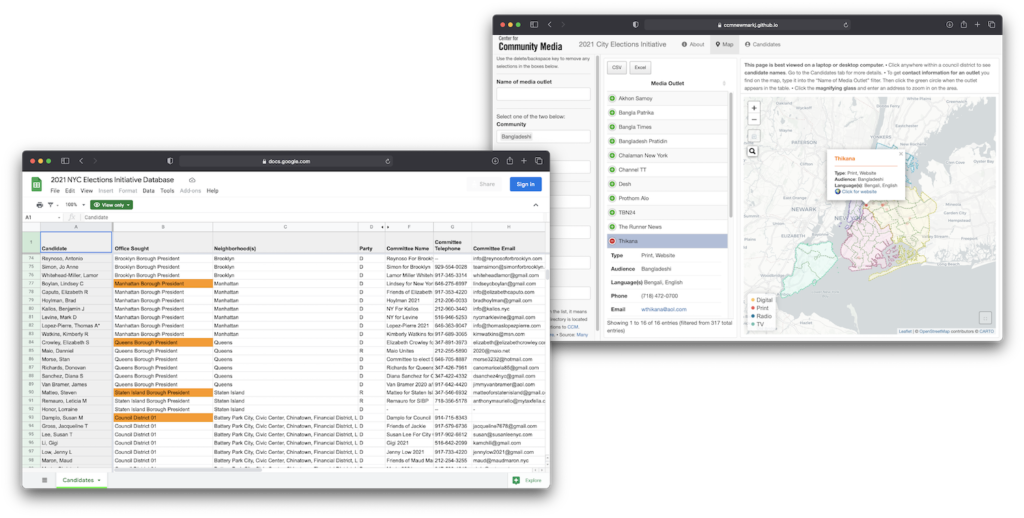 Between April and June, Keisman conducted one-on-one calls with publishers, as well as with campaign staffers and political consultants, in more than 100 campaigns for local and citywide elected office. His own background as a former community media publisher enabled him to help publishers quickly troubleshoot the structural and informational barriers they face in accessing their fair share of election-related advertising dollars. In his consulting sessions, he worked closely with publishers to develop concrete strategies for effectively selling advertising during fast-paced campaign seasons, and made campaign staffers aware of the media sources most trusted by the immigrants, people of color, and other vulnerable New Yorkers they needed to engage through their campaigns.